I was invited by Master Bon and Master Neresini to lead a week long private teaching and weekend public workshop. Here is short report and some pictures from sweet northern Italy district Veneto. END_OF_DOCUMENT_TOKEN_TO_BE_REPLACED

Mr. Hong Junsheng’s Taijiquan Science and Philosophy (a translation) i

Hong Junsheng Taijiquan Philosophy – As I See it

Mr. Hong Junsheng (1907-1996) of Yu County, Henan Province was an indoor Taijiquan disciple of Mr. Chen Fake for 15 years and as the result has received true transmission of the art. After many years of inheriting the tradition and developing it, Mr. Hong has brought the essence of Taijiquan to a scientific and philosophical level and provided a systematic analysis of the inherent laws of Taijiquan; and at the same time able to demonstrate them visually in front of everyone. He is the first to propose the use of the mechanical concept of “neutral equilibrium” in Taiji. He has his own unique perspective on “rotation” and “silk reeling”.

END_OF_DOCUMENT_TOKEN_TO_BE_REPLACED

Do Not Move! i

During one of our full time Taijiquan course sessions with Master Chen Zhonghua, we were talking about secrets. As we were all of the opinion that there are no secrets, he went along with us. However, he pointed out, “There is a difference between inside and outside.”

END_OF_DOCUMENT_TOKEN_TO_BE_REPLACED

Seeing Is Not Believing 5

So much so that a certain master named Zhao was not ready to join Hong’s classes, even after observing training at Daming Lake for three days. Zhao had come to Jinan from the eastern part of the province in search of Hong Junsheng. When he saw the dedication of the students and the level of difficulty of their practice, he decided to look elsewhere. (When I spoke with him, years later, he recalled that even the old people were doing Hong’s taiji in very low stances). END_OF_DOCUMENT_TOKEN_TO_BE_REPLACED The rock in the north western corner of the Black Tiger Springs Park weighs about 30 pounds. It has special significance to me. It was the special object that told me just how strong Hong Junsheng was. END_OF_DOCUMENT_TOKEN_TO_BE_REPLACED

One afternoon during our full time Taijiquan studies, in the Hunyuantaiji Academy studio in Edmonton, Master Chen Zhonghua spoke of the mysterious, spiritual borderlands between yin and yang called ling.  END_OF_DOCUMENT_TOKEN_TO_BE_REPLACED

My Garden Loves Taiji i

i get to admire it then

The following article was once originally part of Master Chen’s former webpage www.chenzhonghua.org. It gives us Grandmaster Hong Junsheng’s first-hand account of what actually happened in the talked about encounter in a martial arts tournament in Beijing between Great Grandmaster Chen Fake and Wu Tunan. I thought it would benefit everyone interested in Taijiquan history to read this article and learn of Grandmaster Hong’s first-hand knowledge of this encounter. I want to thank Shifu Chen Zhonghua for allowing me to re-publish this article in Practicalmethod.com. END_OF_DOCUMENT_TOKEN_TO_BE_REPLACED

Study in Handan Allegory i

Driving through the immense rural landscape of China by car during a recent research trip my teacher, Chen Zhonghua, and I sought diversion from the lengthy journey by entertaining each other with stories. As we were traveling from the city of Jinan to Chen village (Chenjiagou) we happened to pass Handan, a little hamlet tucked in amidst the fertile fields of central Shandong province. END_OF_DOCUMENT_TOKEN_TO_BE_REPLACED

How to “see” the energy alignment? 1

Today, Michael Winkler of Germany suddenly “saw” the energy alignment on the body. This is part of the enlightenment of taiji learning. This is also part of the “entrance” to taiji. Now he is busy looking at many of the “masters” photos to “see” if there is energy alignment in their postures. Just what enabled him to have this ability? We will have to let him explain.

How did my taiji journey get started? 1

I have been wanting to write about how I started learning taiji for a while. I guess everyone has his/her own story, and I will share mine here. When I looked back at it, I always felt that it was fate and luck with all the stars aligned to be learning from Master Chen.

END_OF_DOCUMENT_TOKEN_TO_BE_REPLACED END_OF_DOCUMENT_TOKEN_TO_BE_REPLACED

Stories of Daqingshan and Taijiquan 1 Brennan Toh set a new record of 150 Yilus in one day on June 26th, 2011. Two days before his taiji brother Steven Chan left. Steven previously set a record of 124 in one day. Yilu repetition is designed to train body endurance and integrity. It was said that Chen Fake did 25 yilus a day for many years consistently. Way to go, Brennan!

END_OF_DOCUMENT_TOKEN_TO_BE_REPLACED

The long transpacific journey over, my wife, Baraka, and I stepped onto Chinese soil, thrilled by the permutations of consciousness that this ancient, yet forward-looking land was already beginning to effect upon us. Our toddling daughter, Akasha, for whom any experience was a delightful curiosity no matter how mundane or extraordinary her parents deemed it, took in her new surroundings with an uncomplicated wonder which we, too, hoped to embrace despite the grown-up demands of intercontinental travel. END_OF_DOCUMENT_TOKEN_TO_BE_REPLACED

I have been practicing Cheng Man Ching 37 style for 2 years, and in 2010 Apr, I started learning Chen Style Taiji in Singapore. After 3 months, I walked away feeling frustrated as I realized that what I learnt was “flower punch”. Nothing more than moving and waving my hands in the air. I didn’t give up and searched further on the internet brought me to a direct lineage from one of the master from Chen Village. I told myself, this teacher cannot be wrong. I signed up a 3 months course. END_OF_DOCUMENT_TOKEN_TO_BE_REPLACED

I was watching Chen Zhonghua teach push hands one day in July of 2010 on Daqingshan when I could not resist saying, “I have a method.” On hearing this, Chen Zhonghua stepped away. The opponent did not move. I picked up where they had left off and proceeded to knock the opponent down. Of course I caught him so that he would not hit the floor. END_OF_DOCUMENT_TOKEN_TO_BE_REPLACED

10 Questions with Chen Zhonghua i 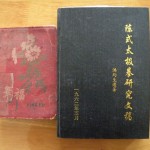 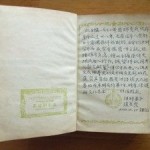 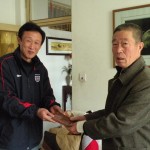 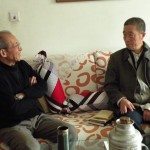 On Oct. 28, 2010 my taiji uncle Zhang Guangzong came to my father’s house for a visit. He solemnly presented a diary that he had kept for 38 years to me. END_OF_DOCUMENT_TOKEN_TO_BE_REPLACED

Master Chen Zhonghua is a modern day pioneer of Taijiquan, and he is re-inventing the way people practice it. The interesting thing is that his intention is to return Taijiquan to its original purpose, that of a martial art. END_OF_DOCUMENT_TOKEN_TO_BE_REPLACED

Return the Art to the Family 3

The Story of Master Chen Zhonghua and Hong Sen.。 END_OF_DOCUMENT_TOKEN_TO_BE_REPLACED

Rizhao – a little push “on the street” 2

These days we went to Rizhao to visit a local Taijijquan – competition.
With our little group of 9 Fulltime students from the West and one Chinese friend we went out for supper.
END_OF_DOCUMENT_TOKEN_TO_BE_REPLACED Travel the World in the name of Taiji 1 by Massimo Neresini (translated d. kerr) Our Massimo Neresini with his Master Giuseppe Bon, after the trip to China  of last year, went all the way to Canada to meet with Grand Master Chen Zhonghua to broaden his Chen style Taijiquan.  This is a Chronicle of an absolutely exceptional voyage.

END_OF_DOCUMENT_TOKEN_TO_BE_REPLACED

Chen Zhonghua: The Master Who Knows i

Master Chen Zhonghua is one who knows his taiji, not one who is known for his reputation.

The story of the eagle i

The story of the eagle

The eagle has the longest life-span of its’ species. END_OF_DOCUMENT_TOKEN_TO_BE_REPLACED

In the year of 1374, Chen Pu moved to a place in today’s Henan province from Hong Tong of today’s Shanxi[1]. Later, this place was named Chen Pu village in memory of his contribution. From this village, the Chen clan moved on to another more suitable habitat a few miles away. It was a place called Chao Yang Village. Today, this village is called Chen Jiagou, in Henan province (see the Map of China in Appendix).

Theirf family oral transmission believed that Chen Jiagou founder, Chen Pu, was a famous martial artist. However, there were no details as to what kind of martial art he did, or what rank he received.

[1] There is a place commonly known as the “Big Locust Tree”. It is a famous place in ancient Chinese history. It was the site of the biggest migration. Till today in China there are still many clans that claim to have origins in the “Big Locust Tree” in Hong Tong, Shanxi Province.

Those who win over others are forceful. Those who conquers themselves are strong. Those who are content are rich. Those who force their way ahead have strong will. Those who do not lose what they have will last. Those who die without losing themselves have longevity.
—Chapter 33, Laoze

You need to be smart to know others. But only those who know themselves are the wise ones. In human life, most people like to know about the affairs of others while few have the inclination to know themselves. Therefore it is a rare ability to know oneself.

Chest of Steel i

It was a hot summer day in the practice hall of the Wah Lum Temple in Orlando. A young Danny Abrahms was trying to learn Chen Style Taijiquan from master Li Enjiu. Danny had been a student of the Wah Lum system for many years. He was quite eager to learn this new system but he was finding it difficult.

There were only a few students studying Taiji. They were surrounded by people practicing other forms and weapons. (Wah Lum is famous for its weapons repertoire. At that time, Danny had experience training with more than thirty weapons.) Suddenly, Danny heard a whip sound; he saw a white flash darting towards Master Li’s chest! Just as the white flash touched Master Li’s chest, Li turned sideways.

There was a loud crash, as a window was shattered! The spear dart at the end of a 9-section chain whip had separated from its chain, as the student was whipping it. The dart was traveling at lightening speed— it certainly could have killed Master Li had it struck his chest directly.

Everyone rushed to see if anything had happened to master Li. He was calm, quite normal and untouched, as though nothing had happened. Experience and quick reflexes had saved his life. When he heard the sound of the traveling dart, by instinct, he spontaneously reacted with the perfect response. He raised his head, and seeing the incoming object, turned his chest precisely 40 degrees. The dart touched his chest but was redirected to the window. What an incredible demonstration of martial skill, effortlessly averting the life threatening danger!

As a martial artist, you will recognize that this was by no means blind luck. One cannot dodge “bullets” with luck. The dozens of years of diligent taijiquan training had endowed him with the ability to act instinctively and appropriately in a dangerous situation.

Danny was duly impressed. With this remarkable inspiration, he was ever more motivated to pursue the path, to learn Taijiquan from master Li. Today he is an accomplished master of both Praying Mantis and Chen Style Taijiquan.

Chen Zhonghua on Shandong TV in 2001 i

Go ahead… push me over… i

After seven years of studying Yang-style, I thought that I knew Taijiquan – very well. At 6’2” and 200lbs, push-hands came easy. The Yang philosophy of relax and turn fit well with my hippie thinking. But with forms named “Cannon-fist”, Chen-style raised my curiosity. How could this be Taiji?

END_OF_DOCUMENT_TOKEN_TO_BE_REPLACED

I was a goat herder! i

During the full-time training months in the summer of 2006, Steven was the first one to go for a walk with the goats. We only had three at the time. It was a fairly easy task. You take the leash of the head goat and the other two will follow. Even though, Steven reported that the head goat wouldn’t go with Steven. It took some time before Steven figured out that you didn’t lead the goat, the goat led you! END_OF_DOCUMENT_TOKEN_TO_BE_REPLACED