Today we did an exercise to rotate the torso horizontally from left to right (first gear), while the arm with the elbow straight as a stick rotated in Ni Chan (second gear).  The second gear’s rotation was driven by the first gear. The result was like how the train wheel turned, and the rod attached to the wheels moved along the rotation without changing direction. 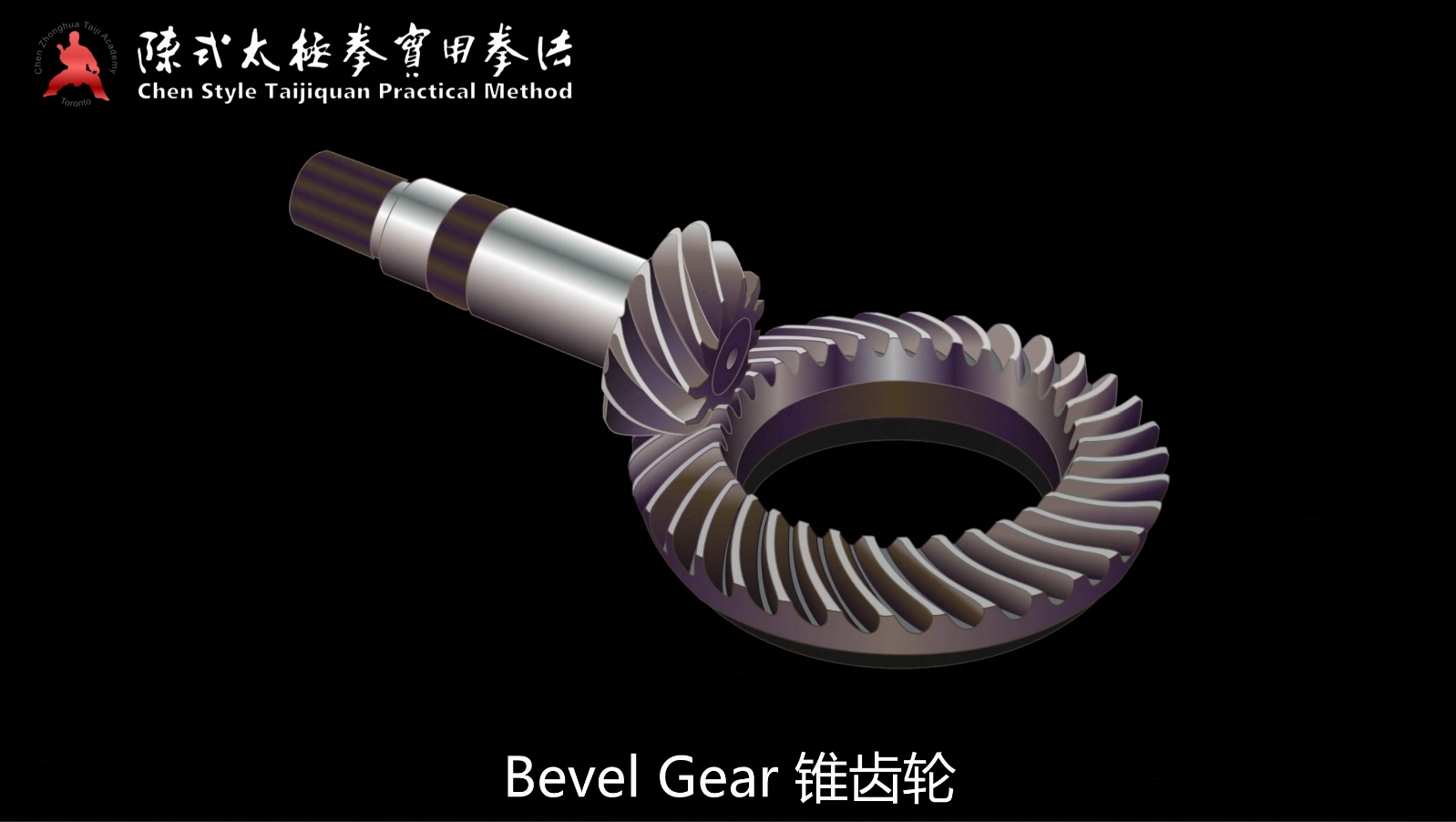 The torso is attached to the arm in the same way as how a bevel gear works as shown in the diagram above. As the torso rotates, the arm must rotate proportionally. This is the result directly related to how it is set up. In action operation, it is key to start the arm rotation from the armpit. Another important part is that the action must be initiated by the kuas, causing the waist (torso) to rotate, in turn, causing the arm to rotate. When the torso must also be like a solid cylinder, when the waist (bottom part) turns, the shoulders/chest (top part) must turn together. This is said to have one action, while two different parts are moving/rotating in their own designated ways. In the future, there can be more than two gear discs attached together, one action drives many different individual movements. In taiji, this is known as when one part moves, all parts move.

The shoulder is where the split happens. It is the middle that is not involved in either side. No power should be added at the shoulder. This allows the dantian and the fist to be connected. The resulting action is called a “through fist/通拳“, it is not a punch in the normal sense.

When observing others performing the same exercise, the following common mistakes are noted:

In taiji, the concept of a bevel gear is very important in understanding how we should connect our various body parts.

The full instructional video can be found at https://practicalmethod.com/2022/06/chen-zhonghua-english-instructor-class-20220603-online-video-purchase/.

Good illustration of an advanced and multi-dimensional concept. Another gear to illustrate Master Chen’s teaching is the dual racks and pinion. This is a linear concept and has been explained and demonstrated by Master Chen in many of his earlier workshops. While the pic below to illustrate dual racks and pinion seems simple, it is not simple to apply but with time and proper teaching one should be able to see results. Other concepts and abilities require to make this work include but not limited to the following (this is based on my own training and understanding and most likely is an incomplete list):
• Finding (or creating) the pipe, the lines, the dots and the pivot.
• I use the term pipe to illustrate direction, there may be multiple lines inside a pipe that need to be collapsed into a single line within the pipe.
• There may be multiple pipes in different directions at the beginning. They will need to be re-aligned into a single pipe in the same direction.
• Do not move the pipe, the line, the dots and the pivot.
• Understand and able to apply realignment through extension in opposite directions at the pivot point.
• Re-alignment may require multiple instances and each instance may have a different pivot point.
• For energy to go outward apply energy inward (this is in terms of the direction of the energy).
• For energy to go outward the inner rings must be stronger than the outer rings. (This concept is explained in Master’s Chen video and not repeated here)

I experimented the dual racks and pinion with Dina Kerr a bit in the last Maple Ridge workshop and am beginning to feel at ease to apply this in my positive and negative circles. The result is amazing. It is like an indirect push by applying energy inward.

Link to the pic foe dual racks and pinion.
https://www.shutterstock.com/image-vector/pinion-turns-rack-moves-straight-line-709064371