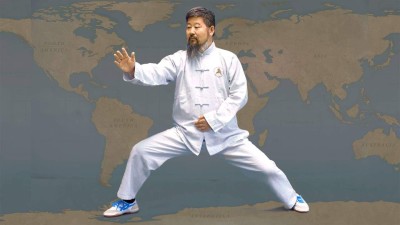 Taijiquan has the saying that “yin and yang are mutually rooted”.
Wang Zongyue said, “Yin does not depart from yang, yang does not depart from yin. Yin and yang benefit mutually and this is the comprehension of energy”.
Zhou Dunyi of the Song Dynasty said in Taiji Illustration, “Wuji then taiji. Taiji moves and produces yang. Move to the extreme generates stillness, stillness produces yin, and stillness to the extreme generates moves again. Movement and stillness are the roots of each other. Once yin and yang are split, then there are two elementary parts.”

In our Taijiquan study, it is a secret that all parts of our body can support each other!
One and nothing are both meaningless. Two, the two dots form a line, which is an extension of the one, but it does not achieve a higher function. Three is different. If the arrangement of three dots is a triangle, it forms a structure that is rooted for each other. If the three sides become arcs, it is a circle. All dots on the circle support each other! This is the secret of the mutual root of Taijiquan!

Being able to mutual root, we will no longer be influenced by the outside! People sees me as a mystery, but is completely revealed to me!