I just had my third taiji workshop with Master Chen in the last weekend (May 22-23, 2010). I had an extreme great time in this workshop. I was really glad to have him confirmed my little improvement thus far, in particular: my yilu form is starting to take shape, and I am not moving my hand (or at least as much as before).I would need to continue to work hard, so that I don’t regress, and hopefully continue to improve.

In this workshop, I felt something different. It wasn’t like Master Chen teaching things any differently, it was me who seemed to be able to follow what he said a little better. I got more out of it than previous times. I was fortunate to be able to spend a bit more time outside of the workshop with him as well. The causal conversations with him during lunches and dinners, or in the car gave me a deeper understanding of him as a person. Besides his great taiji skills, Master Chen is a great teacher because he has terrific skills in teaching. He was a teacher of students ranging from kindergarten to Grade 12 in the public school system. He traveled all around the world teaching taiji to people with different cultures, characters, and learning abilities. I was also impressed on how he was able to point out a non-technical issue for a couple of students, and that issue hindered them from making progress. While we are doing exercises or performing yilu, he walked around looking at every student giving advises and correcting mistakes. We only had 13 students in this Toronto workshop, but he did the same thing with 65 students in Italy. I admired his passion and dedication. He noticed that I asked fewer and fewer questions in each workshop. Part of it was that I was asking questions based on my normal logical mind and non-taiji knowledge, as he pointed out they were basically irrelevant to making progress in taiji. As time passed by, I began to understand that point. Another issue for me was that once I had a question in mind, I wouldn’t really listen until I asked my question and got an answer. That obviously wouldn’t be good. The following are notes I took during the workshop: Day 1 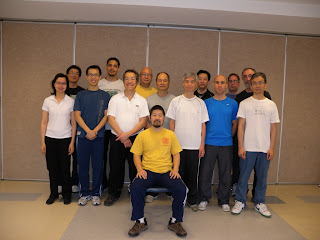 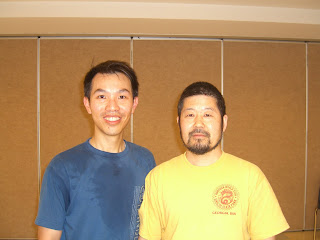