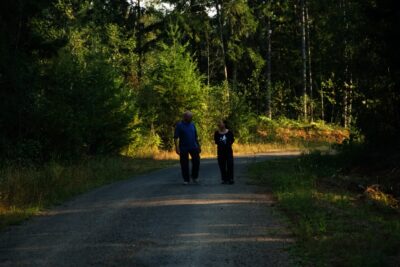 END_OF_DOCUMENT_TOKEN_TO_BE_REPLACED

TAI
CHI ELEGANCE
There’s always a highpoint for me in each of Master
Chen’s Zoom classes.  On Feb. 24th
that moment was when he said that our tai chi should be “elegant.”  The class started at 6:30 in the morning,
about two hours earlier than I usually get up.
I was not feeling elegant.
Shortly afterward, I took a video of my yilu.  It was embarrassing, definitely “inelegant.”  So, now I’m figuring out what elements made it
look that way.  The most obvious thing
was that I was always looking down to check on my movements. When I look down I
lean forward, which makes me wobble and toss.
I have to get good enough that I
can trust my body to do its job without my checking on it all the time.  I think learning tai chi is much like
learning how to drive—when you first start you look down at the steering wheel
and the pedals.  You quickly learn how to
operate them and then lift your gaze to look out the windshield to see where
you want to go and how to get there.  You
don’t have to look down at your hands on the wheel and your feet on the pedals
anymore. You trust your body to do what you’ve trained it to do.
Another problem was focus.  I have to be doing tai chi, not thinking
about lunch or the rest of my day, not watching myself in the mirror or listening
to music.  This is not the time to be
multitasking and yet that is what my mind insists on doing.  Somehow I have to be alert and not distracted
by anything.  Focusing on the imaginary
opponent in front of me helps.
I figure I’m not really ready for elegance.  I’m still at the stage where I have to focus
on each individual movement to make sure all the tai chi principles are in
them.  Perhaps someday I’ll be able to
stand tall and look ahead without having to chaperone my body, but I’m not
there yet.

The Chain Saw in Chen Xu i

During the 12/22/21 English Zoom class, Master Chen showed some clips of Chen Xu aggressively overwhelming a student.  I think I saw how he did it.  Besides taking the student’s space, he moved as if he was a chainsaw; that is, just as the teeth on the chain bite into the wood and are pulled backward by the chain, Chen Xu’s feet caught on the ground and were pulled backwards, which pulled him forward.  He never punched or even pushed, he only pulled.  Even when he had pulled himself to the student he never punched or pushed.  He continued to pull, not so much with his legs, but with his arms as he clawed his way around the student.

Maybe the way you fight using tai chi is the same way a tiger attacks.  Predators never punch.  In fact, the only reason they extend their front legs is so that they can pull them back.  I don’t remember where this saying came from, maybe xingyi: ”The hand never comes back empty.”  In other words, the hand or claw is extended, grabs something and then pulls back.

So, I suggest an English name for Chen Xu: Chain Saw.  Chen Xu and Chain Saw even sound pretty much the same!

Re-Education of a Stubborn Old White Guy i

By the time I first met Master Chen at a Phoenix workshop in 2015, I had already studied martial arts for a long time, since 1963 to be precise. So, I had strong opinions about what was correct and what wasn’t. I thought (and still do) that tai chi is called a martial art for a reason. It’s not called a health, meditative or energy art. Martial means it can be used to kill, but at the same time the killing has to be done artfully. Just clubbing someone to death doesn’t qualify. END_OF_DOCUMENT_TOKEN_TO_BE_REPLACED

Once again Master Chen found it necessary to tell us how to learn. Many of us were practicing as he was teaching. And of course, I was one of them. He was giving each of us a private lesson and we should have been listening intently. At that point, practicing was just a distraction. Yes, practicing is totally necessary, but not when the teacher is telling us the important things that other teachers would call secrets and probably wouldn’t even teach. If we’re at all smart, we’ll take advantage of the wonderful opportunity Master Chen is providing. END_OF_DOCUMENT_TOKEN_TO_BE_REPLACED I haven’t heard too many people praising the pandemic, but for me at least, it’s been great. I mean, I’m not fond of wearing my N-95 mask in buildings; it tickles my nose and fogs up my glasses when I talk. But these are minor problems compared to the boost it’s given my tai chi training. END_OF_DOCUMENT_TOKEN_TO_BE_REPLACED

Probably the biggest thing had to do with the learning process: The questions that arise in my mind are usually off topic and I think their purpose is to distract me from paying full attention to what Master Chen is teaching at the moment.  By asking them out loud I’m distracting everyone else too.  My mind doesn’t want to give up control.
END_OF_DOCUMENT_TOKEN_TO_BE_REPLACED

Change in practice after Phoenix workshop 1

I just attended Chen Zhonghua’s Phoenix workshop last weekend.  As usual, I thought I was pretty good thanks to all the practicing I had done since last year in Iowa, and as usual, Zhonghua threw my confidence into the toilet.

It was a great workshop, although overwhelming.  At least I’m more comfortable with what I think is the most important thing that was taught, namely don’t think.  Just follow the directions and don’t question them.  This is a big thing for me, someone who is always up in his head comparing and questioning.  Turns out that thinking is just a distraction from practicing, which is the only way to learn what is being taught.  How to get out of my head?  I think the answer is to practice as intently as I can.  When I do that, I notice interesting things and have occasional exciting insights.  It’s that excitement that keeps me going and that keeps practicing tai chi from becoming like a diet, where it takes willpower to force me to do it.

The second biggie I came away with is the need to segregate all the parts within each movement.  I learned that when two parts within a movement go at the same time they are double heavy.  I had not been separating the parts, which made for a prettier form, but was not leading me in a good direction.  So far, I’m just working on the part up to the pound mortar of the first section of yilu.  It is so hard!  But it’s starting to feel right, especially if I practice it with stalking power.  With that power, each segment of each movement seems to slip into place.

These two things are enough for me to practice right now.  I’m already starting to feel  human again and it’s a given that my confidence will be back by this summer in Iowa, just in time to be destroyed by the master again! I’m extremely pleased at what I’ve taken away from the camp. I have a lot to work on between now and the next Master Chen Zhonghua workshop, for instance:
END_OF_DOCUMENT_TOKEN_TO_BE_REPLACED