Grandmaster Chen Zhonghua said that in Taiji, you “lead into emptiness.” This idea is central to the practice of Taiji. It means that when you “act” in Taiji, you don’t do something, but do something. When you prevail against an opponent, you are not “doing” something to your opponent. You never react with force against force. In Taiji, you are fighting yourself, not the other person. These seeming contradictions really mean something when you experience them, as I did in the Edmonton workshop on September 17, 2022. I felt them; Grandmaster Chen “did” them to us, without “doing them.” 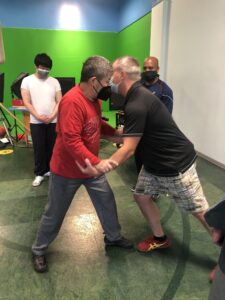 To “lead into emptiness” means you create negative space into which your opponent “falls.” Your opponent “falls” into the “emptiness” that you create. What it may look like is: your opponent falls to the ground, flies staggering across the floor away from you, falls over backwards, or any other such form of defeat. It happened to me in the workshop in several ways, several times. Once, I went flying, staggering across the floor, away from Grandmaster Chen. And yet, I WASN’T PUSHED! In fact, I felt no force of any kind, and there I was flying staggering across the floor. Another time, when Grandmaster Chen was teaching me, we locked up, and he told me to sit downward in order to do something without doing something to him. He went down, and I think I almost hurt him. (Very slight movements in Taiji can be extremely dangerous when you do them right—especially if you’re not a master, and you don’t know what you’re doing.) And yet, again, I DIDN’T FEEL ANYTHING; IT DIDN’T FEEL LIKE I WAS DOING ANYTHING! Master Allan Belsheim whispered, “It doesn’t feel like you’re doing anything, when you do it right.”

By creating negative space, your opponent’s own force, power, and even bodily weight has nowhere to go. And so, it falls to the ground, or flies staggering across the floor. That is what it means “to lead into emptiness.” All this is counter-intuitive. We naturally react force-against-force. But then, your opponent’s power DOES have somewhere to go—against you—and you lose if they’re stronger. There are other terms that flesh out “to lead into emptiness,” such as “peng,” and other methods of doing without doing that we will look at in subsequent posts. But the end result is that the master leads into emptiness. And the other person’s power goes “against” themselves, not you. It goes into emptiness.

My honored Masters at Edmonton Practical Method Taiji Academy have given me permission to post here without my posts being pre-approved by them. So, in this post, I thought that I’d abuse my privileges already with an observation from my own education. As a student of World Religions, I immediately thought I recognized the Buddhist concept of “emptiness,” or “sunyata,” in the wording that Grandmaster Chen applied to Taiji. In fact, I wrote a paper at Harvard about it in relation to Kung Fu, at the urging of my master, then. (My professor was dead-set against me writing about it and thought I was getting all my ideas from a silly 70’s TV series starring David Carradine. But he gave me an A on the final paper, and said he was surprised such a paper could have been written.) Grandmaster Chen states that Taiji is largely Taoist, another form of Chinese spirituality. Yet, Taoism has a concept analogous to emptiness, “wu wei”—“inaction,” or “effortless action.” And there are references to Buddhism throughout Taiji, such as “Buddha Pounds Mortar.” In fact, when China imported Buddhism, it transformed it into a new form: Chan Buddhism (Zen, in Japan). The founders of Chan Buddhism understood “sunyata,” or emptiness, as the same thing, basically, as “wu wei.” To lead into emptiness, “sounds” to me very much like “wu wei.” (I may not be allowed to post, anymore, if at all, without prior approval, after this.)

About the picture: Grandmaster Chen (red shirt) is creating emptiness into which his opponent is about to “fall.” It looks as if Grandmaster Chen is pulling his opponent down, but he is not. If you look carefully at the bodily position of the student in the black shirt, you can see that he is on an angle. If there is no resistance (emptiness), his own weight is heading down toward the floor.