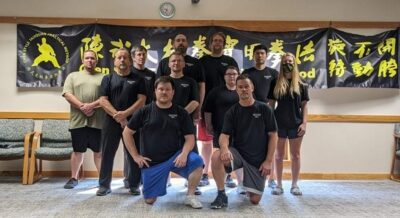 The North American Practical Method Training Camp was back on!  Most people had limitedly physical contact practicing Taiji with another person for over a year due to the pandemic.  In organizing this we made some adaptations and innovations as a means of overcoming the current challenges that were presented to us by the global crisis.  It was phenomenal learning experience!

Prairiewoods Retreat Center, where the camp was held, was equipped with a “REALLY LARGE” screen and external camera. Zoom lessons were arranged with Master Chen Zhonghua twice per day. The morning sessions focused on foundational movements while the evening sessions focused on push hands/applications. It was just like having Master Chen right there in the room!!! His ability to see what we were doing, what needed to be corrected and verbal instructions allowed for an optimal learning experience. First had, we can tell you with this model of learning, there were increased listening to instructions as we all had the camera lenses on us and we all took turns under the close eyes of Master Chen.

In previous camps, it has been commonplace for Disciples of Master Chen to teach breakout sessions. This year that defiantly was the case as all Disciples assisted in teaching. By the end of the day we were all tired, bruised and knew we put in the time and effort into our taiji training. It was GREAT to be back at it!

Bones are structure (static power)
Everything else gives dynamic power

Auger:
Elbow, waist and knee can each be the handle in the middle of the auger.
They can go be the part that moves, while the rest stays anchored, providing the power for the drill.

Follow the curvature, extend the straight.
Curves are made up of a large number of tangential lines.

Tiger’s Mouth:
Hook the opponent with the tiger’s mouth (curve between thumb and forefinger)
Cut into the opponent as if that curve were a sickle, using the pinkie

Circle stretches (positive and negative):
Stretch out as far as you can , get longer, use the kua to drive the circle
Stretching like this will ache,
separate the elbow to shoulder from forearm

Wiggling and Peeling:
Go in like a ratchet, don’t go back.  Kua goes in (not pops)
Like a full set of ball bearings, the hands / arms are the outside rotating piece, the torso is the inside rotational piece
NOT pushing; arm is fully separated from the torso.  Kua goes in to take up the space.
Wiggle the joint behind the contact spot, kua takes up the space.  It should not pop.

Main mistake areas after learning choreography
1.  Separation
1.5 Inside in, outside out
2.  Lead, like threading a needle (can’t pull on it until it’s through)
Needle is always outside
Thread is always pulled
Fabric is alays a barrier

You can’t lead with something soft, has to be hard.

Needle:
Inside is like a rope, outside is hard (head, hands)
Stretch head as well, pull the neck to follow the head

The needle should be like a fishing hook, not moving.  The fishing line is attached to the hook.
Do the form until you know where you’re at, even while distracted (watching TV).  Once you know the choreography at that level, you can pay attention to other things (corrections, changes) while doing the form.

3 ways of practicing the form
As if you have a 70kg hat on
As if there’s a rubber cord pulling your elbows in.  Easy to come back in, takes a lot of effort to go out.
As if there’s something expanding between the knees; have to compress it to move the knees closer together.  They should go apart very easily.

Rotation:
Rotation is an outside force when the outside is locked.  The force has to go somewhere; it goes sideways.  It’s like an orbit.  There’s 2 forces competing; and the end result is a sideways vector.

Types of no movement:
Needle (end of a door that’s on a hinge)
On a track (double-hinged doors)
Suspended in the air

Normal movement:
If you make normal human movements, others will be better.
Make alien, uncomfortable movements

Drill:
Hold onto a bar, go down without moving the hand.
Create a separation between arm and torso in the armpit

Hardest connection to separate is the wrist / elbow.  Lock the elbow, only shoot out the fingers.

Dimensions:
Once you can separate / isolate body parts, and they are each doing their own thing, you have another dimensionality.  People without that level of dimensionality can no longer affect you.  Most people are only 2 dimensional.
Only agents can cause change, your arm needs to be fully separated in order to become an agent.
Isolating the parts of the body is the process of taiji
Separate each part of the body from the rest.