Meet up in Estes Park, Colorado, USA with John Upshaw and Paul Carlson 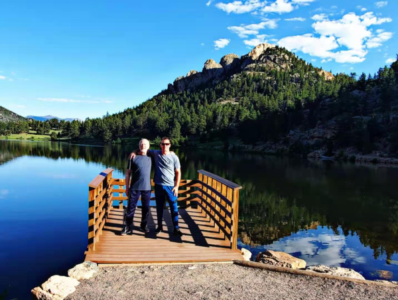 I met with John Upshaw on Friday and Saturday mornings, July 9 and 10 in Estes Park, Colorado while he and his family were vacationing there.

John helped me in some areas that I had questions about. Basically, Saturday was a review of what we talked about on Friday with a few enhancements.

We started reviewing some of the features of our foundation exercises (基本功) starting with Twisting the Towel. Actually we only got as far as Fetch Water and Six Sealing Four Closing. All of what we worked on in Twisting the Towel are also the basic requirements in the other foundations as well.

For Twisting the Towel, starting in a medium horse stance these are the things we need to keep in mind in our training:

Initiate the exercise by opening the kua and pushing it forward. The elbow should be squeezed toward the centerline so the forearm and elbow can move into a small tube sticking out from the center of the body at a 90 degree angle. At the start the elbows should not be sticking out but should not be too tight to the body because then there is no where for them to go. As this exercise is done we need to squeeze the kua and shoulder toward each other, hollow the chest, and push the elbow inward. Doing this helps the shoulder to open up. All this is while keeping the shoulders from turning forward and backward. The energy should come out through the hand, actually the middle finger. In doing this it is helpful to maintain a Tile Hand.

The differences for Fetch Water and Six Sealing Four Closing are the stance (a half horse stance) and the starting position of the hands and forearms. The basics are the same. We also need to keep in mind the line created by the arms and hands. The wrists should always be kept straight. At the end of each exercise we need to create a stretch along the lines we created. The stretch is internal and expresses itself very little visually. Shoulders should still be squeezing toward the kuas and the chest should still be hollow.

The drill goes like this. You and your opponent engage. You need to match your opponent. Matching means, matching the force he exerts on you. Don’t try to overcome him with strength and don’t let him overcome you. Part of this matching is finding his line. It is probably long because it comes from his back foot to the point of engagement. The next step is to create a line of your own; extend it; stretch. Then you find a place to cut his long line and shorten it. This place is a fixed spot. Somewhere on his line we cut it by only a touch. No force is applied. We are not to try to change his line except find a place to cut it (touch it).

Next is to add something. That something can be a stretch, it can be a rotation, or maybe can be to take his space.

If all goes as planned, your opponent is moved and he may not even know how it happened. You may not know how it happen either. We worked on this some and it is amazing. John could do this to me and I would not be able to resist. In fact, I wouldn’t even know something was happening until I was moved out of position. Then when I tried it with him, it seems as though I could do it but I didn’t really realize that I did something. I didn’t feel that I was doing anything.

We worked on this for awhile. I feel that it is really tough to grasp the idea that this actually works. I think that I will need more experience to really find out what is happening with this drill. Hopefully someday I will be able to move out of the basement and go to level 1.

Thanks for the summary Paul! I look forward to seeing you at the North American Practical Method Training Camp in Iowa next week.