He became a disciple of Grandmaster Hong Junsheng in January of 1981. During the dozen years he was with Hong, he received care, instruction and motivation from Hong. Grandmaster Hong personally copied his work “Taijiquan Annotations” for him. He also learned a great deal from a copy of taijiquan magazine that Hong made notes of.

When he was learning in the Black Tiger Springs Park, it was senior brother Li Zongqing who taught the form. During this time, Master Hong took time every day to correction his forms and gave him demonstrations. There was a time that Hong would bring to the park pages from his memoir to show him and he would return the pages after reading. In addition to taijiquan, he also learned about literature, calligraphy and opera in Hong’s home.

He started teaching Hong’s taijiquan in the 1990s and established Shandong University Taijiquan Association. He is currently the president , advisor and coach of this association. During these years, there were an average of 50 students each year. He also taught students from USA, Britain, France, Germany, Japan, Korea, Russia and Laos. 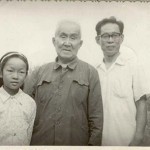 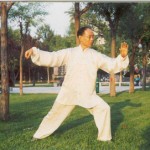 Has anyone bought Mr. Yang Xishou’s book with DVD that recently came out. I was wondering if anyone could explain why Mr. Yang’s form looks so different than what I’ve seen of any other Master Hong’s disciples. When watching video’s of Master Chen, Li and Hong you can see they are mostly the same, but Mr. Yang is much different. I was hoping someone could lend some insight on the focus and speciality of Mr. Yang’s form. It seems to me to be lots of Chin Na. Thanks.