Journey from “Educated” to “Uneducated”

My journey into the Chen Style Taijiquan Practical Method started in 2016. In May 2016, I went to DaQingShan to experience first-hand what it feels like against someone who practices this system. At that time, shifu Chen Zhonghua was there and he told me to just try anything on him. Before I knew what happened, I was already on my hands and knees on the floor. I thought I was probably not ready that first time, so I tried again. The same thing happened. I tried a third. I just couldn’t understand how he made me fell to the ground so easily without me putting up a fight or any resistance. It felt so magical to me at that time, a feeling which I simply couldn’t explain. 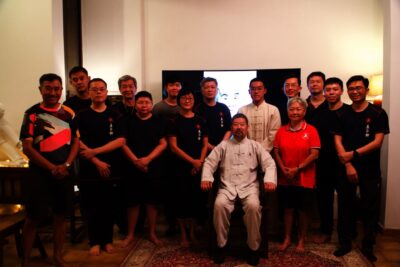 Over the next six years, I began to train and dive deeper into the system, hoping to one day be able to replicate that feeling with my own body. However, before I was able to achieve it, I felt like I had reached a point where my progress was stagnating. Thus, I signed up for shifu’s weekly push hands zoom classes at the start of this year, and also accompanied him to Indonesia after the Singapore Practical Method workshop. The year is not over yet, but I would say it has been very fruitful thus far. It’s not an overstatement to say that my understanding and improvements this year were much more than the past four years, barring the first year when I was still a beginner picking up the system. This article serves to pen down and share my training experiences in the Practical Method system, while hoping that it might also aid others along the same journey.

In the past, shifu had mentioned that it is very difficult for people from Westernised countries like Singapore to master the system, because we are too highly educated. We are always thinking too much and asking too many questions. I could never understand what he meant at that time. Isn’t it important to think and ask questions to improve? However, accompanying him to Indonesia from 24 – 30 Aug 2022 gave me a lot of insights. Through my interactions with shifu, I began to learn where to look and how to listen when he demonstrates a move. Questions that usually pop up in my head disappeared, as I realised that shifu had already given the answer every time.
Don’t overthink
Previously, I was always thinking too much about the “what-ifs”; like “What if the opponent is not in the right position for me to execute my move, what if the opponent do this move to counter my move, or what if we both execute the same move at the same time?”. Shifu has said this kind of thinking is poisonous to the mind. The matter of fact is all of these thoughts are just hypothetical situations which have not happened and probably never will. Instead of spending the energy worrying about the “what-ifs” that are not within my control, why not use it to do something real and concrete, which is practicing the move more? Interestingly, this concept also relates back to our Practical Method system, where instead of trying to move our opponent’s body which we do not control, we move our own body which we are fully in control of.
Don’t overanalyse
I often fall into the trap of thinking I know how the move works by applying my own “educated” knowledge. But the truth is I know nothing about how the Practical Method system works and should treat it as something totally new to me. By trying to make sense of the move with my own knowledge, I ended up limiting my own learning. This is because when I think I know how it works, I stopped observing and listening properly, which became the biggest obstacle to learning the system. Shifu has the experience of training and teaching the system for decades. Thus, I should keep my mind empty so that he could fill in the proper instructions without any distortions on my part. However, shifu did mention that we should create analogies using our own experiences, as this helps to reinforce the concept in our minds. Additionally, shifu will also be able to tell if we really understood the concept that he is trying to teach.
Don’t overstep
One observation I made was after shifu demonstrated an exercise or a move to the students, some will ask how it applies in a practical application, and shifu may have to further explain or demonstrate another move which deviates from what he intended to teach. Alternatively, after doing the move a couple of times, we start to think we know how to do it and move on to doing something else, also deviating from the intended training. After reflecting, I was exactly like this in the past. However, after multiple interactions with shifu over the years, I realised he adapts his teachings based on our current skill level. When he keeps teaching the same thing over and over again, it simply means we have not trained our bodies to a sufficient ability to move on to the next stage. I have since changed my focus to simply follow and train exactly as he instructs without deviation. It may take months or years, but I believe such time is required to transform the body.
I relate learning the system to learning a new language. Take for example English. The teacher first teaches us the alphabets starting from ‘A’, ‘B’, ‘C’… to ‘Z’. At that time, we don’t ask what if there is no paper or pen for us to write on, or about how we apply ‘A’ in a word or a sentence. We simply keep writing ‘A’ in the same three strokes until it becomes part of our muscle memory. Likewise, we do the same for the remaining 25 alphabets and their lower-case forms. Is it important to know how to use the alphabet in a word and sentence? Definitely, but not at the current stage of learning the alphabets. It is only after learning the alphabets that we move on to the next stage of learning “A is for Apple, B is for Ball, C is for Cat etc…”.
I can’t believe that it is only on the sixth year that I came to this realisation and switched my mindset on learning the system, which is to become “uneducated”. When shifu demonstrates a move, as an “uneducated” person, I simply observe, listen and train accordingly. Rather than asking hypothetical or next level questions, I should focus on asking questions about the current move demonstrated; for example for shifu to elaborate more on what he said, for shifu to repeat the move again from a different angle, or to feel a part of shifu’s body to understand more about how to execute the move.
Throughout this journey, I felt that the benefits of learning the Practical Method system is not just limited to gaining the Taijiquan skill or ability. It has helped to sharpen my thinking and to become more present and grounded in life, no pun intended. It has also reminded me to be more humble and not come up with my own assumptions before truly understanding something. I’m really grateful that I was able to encounter the Chen Style Taijiquan Practical Method and to learn directly from shifu Chen Zhonghua.

Your experience mirrors my own and it’s great that you can write it down so clearly. I started in 2016 also, and wasted a lot of valuable time negatively judging his teaching against my previous learning. I’m glad you recognized your barrier while you’re still young.

Thanks for your compliment Steve. Many of my peers also struggle with the issue of conflicting instructions from their previous backgrounds and had to take some time to correct them. I’m lucky in the sense that I did not practice any other forms of martial arts, and hence have no additional “baggage”. Regardless, I believe this is a process that most of us will go through at some point, and I feel becoming “uneducated” will help to improve our learning. The beauty of the system is that age doesn’t matter. As long as we practice consistently, we can always get better.

Great write up and really good self awareness. I’ve just started this year myself and it was a good insight to how I can approach this method to help me progress better.

Thank you. Hope it helps and all the best in your taiji journey!

Thank you Franklin, for your clear insights into your learning journey. I feel I am starting to relate to the issues you raise, now in my 8th year! But knowing others can break through with my similar problems, gives me hope.

Thank you Paul. Sometimes it’s that “a-ha” moment that comes unexpectedly. As long as we don’t give up, I believe there will always be hope for it to happen one day. Good luck and all the best!