Duanwu Festival, also known as Dragon Boat Festival, is one of the four most celebrated traditional festivals in China. It is on the 5th day of the 5th month of the traditional Chinese lunar calendar. The exact date varies from year to year on the western calendar. This year it is on Monday the 14th June.

The festival originated from Jiangsu and Zhejiang area, where Shanghai is located. May the 5th, the beginning of summer, was known as the Evil Month and Evil Day in ancient times, was considered an unlucky day since the pre-Qin Dynasty. Because that was when plague epidemic started. So people use different ways to get rid of the plague and bad luck on this day. In Shandong province where I come from, we hang wormwood at the door. We consider wormwood as a type of herb that can treat diseases, standing for loads of blessings.

It is also the day when people worship dragon, as the Chinese consider ourselves as the descendants of the dragon. People do dragon boat racing in the water. I am from an inland city, but you will see the races in Jiangsu and Zhejiang where there are plenty of rivers and streams.

It is also considered a festival in memory of Qu Yuan. Qu Yuan(about BC343－BC278) was a Chinese poet and politician who lived in Chu State. 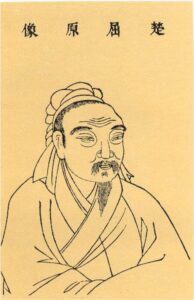 He disagreed with the polices of Chu King and was exiled and unable to return to serve his motherland, he was in great pain and sadness. From the trip along the Yangtze River, he wrote his last poem “Huaisha”, jumped into Miluo River and died. People were so deeply moved by his commitment and devotion to the state, they didn’t want the fish to eat his body. So they wrapped rice with leaves and threw into the river, which is called zongzi in later generations. Nowadays there are a lot of different flavors. In my hometown, the most popular flavor is glutinous rice with dates as fillings. In the south, they also have the ones with meat and taste salty.

Thanks very much, Yuxin, for taking the time to write this up for our Western students.